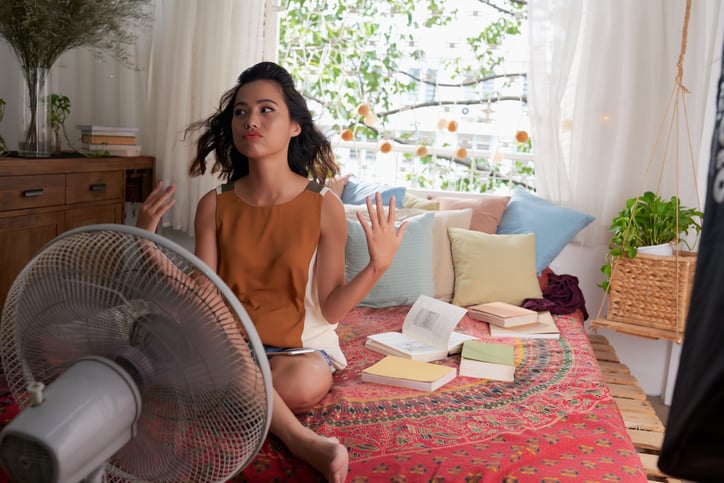 There are usually signs of air conditioner failure before the system completely stops working. Noticing the signs of failure can help you get ahead of costly repairs and hopefully save you from an expensive emergency.

If the system is running but the air temperature is not what you have set it to, or even warm, you should have it checked out. Common causes are clogged air filters or return ducts. Worse, it could be a symptom of a compressor failure or refrigerant leaks. Weak airflow could be a sign that your blower is malfunctioning.

A tripped circuit breaker is a symptom of AC compressor failure. The compressor could be overheating during operation and drawing too much power, which causes the breaker to trip. One thing is certain, the “fix” is not to routinely flip the breaker back on! The circuit is tripping for a reason, and that reason needs to be discovered and corrected. It causes a potential fire hazard when a circuit breaker is popping under load during what should be normal operation.

This happens when the system shuts off before a cycle is complete. A full cooling cycle will bring the temperature to the level set at the thermostat. When something in the system prevents it from reaching that temperature and prematurely shuts down, you have a problem. It could relate to compressor failures or clogged filters. It may even just require a refill on refrigerant levels. Evaporator coils can become frozen, or the air conditioner could be too large for your space. Short cycling can drive up energy bills and cause stress on the unit that will degrade its lifespan, so you should have it checked out sooner than later. The frequent on and off of the cycles as they are unable to reach the right temp are also symptoms of short cycling.

Outside Unit Shakes on Start-up

Sometimes the condenser will have trouble starting and begin to shake. This is known as “hard starting” and is generally a sign that it is going to fail soon. You definitely want to catch it before it fails, so if you notice this happening then turn the system off and give us a call.

It is perfectly normal for the system to make some noise when it starts up and the fans kick in, and compressors turn on. However, grinding, squealing or clanking are NOT part of those expected noises. It may be just a loose part or a broken motor bearing or something needs to be lubricated- the key is to catch it while it is still a maintenance issue and not a broken part problem.

The Compressor Doesn’t Turn On

You have hot air coming out and go to check the unit. The fan is working, and there is power to the system but the compressor doesn’t seem to be running. The first thing to do is to turn down the thermostat to get the compressor to cycle on. If that fails to start it, there could be any number of problems causing it. You should give us a call to come in and diagnose the cause at this point.

Is a Zoned HVAC System Right for Your Home?
4 Signs That Your Air Conditioner Wants to Quit
Home Heating Myths