Capacitors – What They Are and Why They Fail 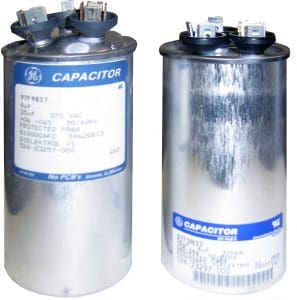 a device used to store an electric charge, consisting of one or more pairs of conductors separated by an insulator.

That is what the dictionary definition will get you. It sounds like a battery, and in a sense, it is. It stores a charge and can discharge that charge very quickly – and it is used to error correct within an electrical system among other things.

Knowing what it is and what they do gives us a better idea of why they fail. There are also several different kinds of capacitors which all have their own uses in a system and are constructed differently.

Like a battery, eventually the components that make it up can be used up. It has a limited number of starts, and frequently turning on or off those use up the life of the capacitor faster.

Capacitors can fail due to a number of reasons and when they fail it can lead to short-circuit, damage to the circuit and sometimes even explosion.

What are some of the reasons for failure of capacitors?

Inconsistent main voltage feed to the home is one. The voltage coming into the system is above or below rated its rated capacity. Power outages or surges and excessive heat are also common concerns. Aging can also cause capacitor failure.

Electrolytic capacitors fail due to leakage or vaporization of the electrolyte inside. This can be caused due to heating in operation. Heating can be caused by mechanical failure or voltages outside the design range of the component. In electrolytic capacitors heating can cause the formation of gas inside which can explode through the vent provided.

Voltage surges can also cause capacitors to fail. Over time, capacitors re-form themselves to a particular voltage. When an unexpected surge occurs, a failure can take place.

If you suspect that capacitors may be causing your air conditioning unit to malfunction, contact Gentry Air Conditioning today via our online contact form or 817-488-6733!

R22 Refrigerant: What is it and Why is it being phased out?
Tips to Prepare Your HVAC System for Summer
What Is Two-Stage Air Conditioning?